Tying in with a recent article on the “unstoppable rise of veganism,” a podcast of Russell Brand’s interview with Adam Curtis, “Do We Really Want Change?,” offers a potential route forward from the seemingly destined-to-fail calls for change that we have witnessed over the last decade or so, whether the Occupy Movement in the west, or the ripples of revolution around the middle-east.

Curtis identifies an actual, though brief, moment in history that resulted in monumental change, and which came from the Civil Rights movement in the southern states of the U.S.:

“White activists and black activists joined together and they spent years giving their lives, and in many cases literally, up to trying to change the world, which they did, and they surrendered themselves to that” (0:22:20 – 0:22:30).

Curtis details the success of the movement and the subsequent failure of the New Left as the rise of “individualism” takes hold, disrupting the coming together of groups of people, instead spreading the message that to be “true” to yourself is the real “goal” in life and that from that (being an individual) the world will change as a result (which it hasn’t). So, with veganism on the rise (around 1% of the U.K. population is believed to be vegan) is it time to recognise that when veganism is most challenging and difficult that it is at its most effective?

What I mean, here, is that the growing trend for multinationals to assimilate veganism into their practices (many of them dubious in nature) is perhaps yet another example of individualism working for the benefit of the corporations and managers of capitalism. The capitalist model has tapped into the fact that being vegan is not always easy (you can’t just nip into any old shop to buy a snack without inspecting the contents of that pack in the first place (and even then you need to be clued up to the names that are used to describe the ingredients).

So, instead of the practices of old, where (and this is true, I’ve heard many a vegan testify to this) vegans would meet with other vegans to discuss foods that they can eat, sharing knowledge, and maybe even discuss activism and the like (perhaps they can be called We-gans), “new vegans” are being presented with a rich array of products that save them from having to do so, thus removing some of the discomfort and inconvenience of having to “go out of your way” to source information. In doing so, vegans are being kept isolated from one another in that there is a lack of incentive to grow the vegan community (perhaps they can be called Me-gans) – instead, becoming individual vegans, just as the markets require us to be. 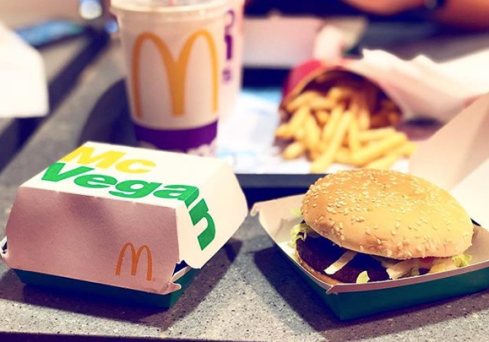 A great example of this has to be McDonald’s new “Vegan” Burger, which reads like a contradiction in terms, or just a really sick joke. One of the largest killers of animals on the planet asking vegans to come into their “restaurants” and sit side-by-side with carnivores? Bizarre, but true. The motives behind the launch of the McVegan can only be linked to profit, for there can be no ethical reasons behind the decision, as the animal slaughter continues unabated.

So, try not to get too excited at veganism going “mainstream” because you may just get what you didn’t ask for. Instead, think of the myriad ways that you, in your small but perfectly capable way, could disrupt carnivore practices. You could write about it, talk about it, or just do something about it (pouring super glue in the locks of McDonald’s doors as you pass a closed store (making sure that it was dried in time that no McD’s employee would suffer any harm in the process) would be illegal and childish, of course)…

About the textual silence project...

...reading, thinking, and thinking about reading... ...and then writing... END_OF_DOCUMENT_TOKEN_TO_BE_REPLACED
This entry was posted on Wednesday, April 11th, 2018 at 1:11 pm and tagged with Adam Curtis, politics, Russell Brand, Vegan and posted in Culture, Politics, Pondering, Revolution, Writing. You can follow any responses to this entry through the RSS 2.0 feed.
« The “Could AI Really do a Worse Job” Posts
Leaps of Imagination, Like When You Were a Kid »

Spare a moment of your time here... Cancel reply