Politics: Unworkable in Its Current Form

Just two examples relating to the current political landscape are enough to highlight the fact that politics is unworkable in its current form. David Cameron’s tax avoidance is most depressing and marks, in a way, if you think about it, the shift to a terminal phase for “Late Stage Capitalism,” although that probably requires a further post in order to make that point clear (watch this space).

The equally depressing state of U.S. politics is the other such example, where it appears that U.S. voters will end up with a Republican nominee who is to face, amongst other things, charges that his “Trump University” scheme was fraudulent, and a Democrat nominee who, it seems, is being hounded by the F.B.I. with respect to the “email server” scandal.

When you trace back through history to see the efforts of people who wanted politics to be about effecting change for the good of the many, and there were a good number, it is obvious that today’s political climate is not worthy of the name “Politics.” As such, citizens across the globe need to think about solutions to this current problem.

A brief search of the internet (well, Google) with the search term “petition over cameron tax avoidance” seems to falter around the middle of April 2016, where it appears that all interest in the Prime Minister’s financial affairs falls off a cliff. Either this shows a massive shift from anger to apathy from the British public, and if that is the case then I suppose we all get what we deserve with respect to a figurehead who publicly condemns others for tax avoidance activity whilst employing similar tactics with respect to his own financial affairs, or there is something else at work.

Interestingly, the headline below is dated Friday 8th April 2016 but when you search the internet using the above term the first few pages bring back results dated no later than 13th April, a mere five days after the scandal hit the tabloids. 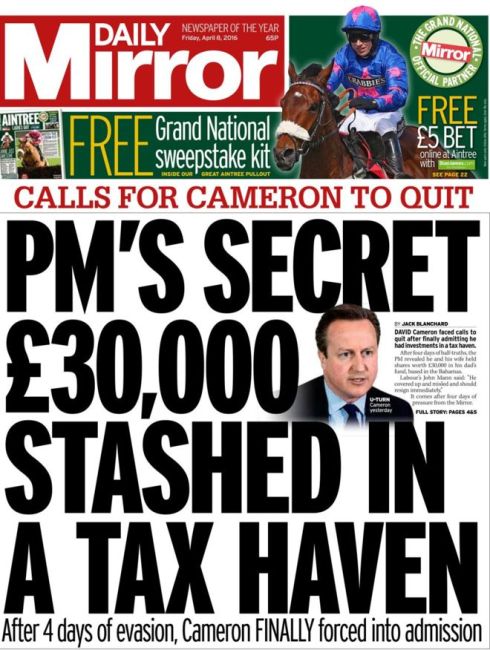 In what universe does such a huge news story suddenly stop being big news? In our universe, apparently. Anyway, in an attempt at working towards a kind of politics that ceases to be about the exploitation of the masses for the benefit of the few, here’s a link to a 38 Degrees petition (click this underliney bit) calling for the PM to resign for deception and conflict of interest, which sounds fair enough. Politics in its current form is unworkable and needs a radical overhaul. A Prime Minister who lies to the public is not a Prime Minister, unless the apathy of the public allows it to be so.